The Role of Tourism in Fisheries Crises: The Case of Newfoundland and Applications to Maine

Tourism is increasingly touted as a development opportunity for coastal and rural areas affected by natural resource decline. As commercial fisheries face depletion the world over, people look to tourism to help coastal communities recover from economic crisis, but little work has been done to explore if the investment in tourism can ever replace the full human ecological value of the fishery, including its impacts on a region’s culture, economy, and environment. 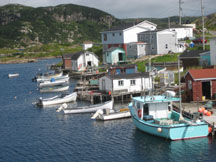 Natalie Springuel’s 2008 sabbatical in Newfoundland examined the impact of the 1992 cod moratorium on Newfoundland’s coastal communities over the last 16 years, and particularly how marine heritage tourism has emerged as a model in the province’s revitalization attempts. Dozens of interviews with Newfoundlanders involved in tourism and fisheries (including current and former fishermen and fish plant workers, boat captains, tour operators, community development and government representatives, residents, community leaders, academics, and staff at tourism destinations, visitor centers and museums) and first- hand observations of marine tourism destinations show that marine heritage, in particular, has contributed to both the revitalization of devastated outports and the rise of tourism in these coastal communities. Though tourism will never replace an exhausted natural resource, it can play an important role in the future of coastal and rural areas. Maine’s reliance on a single marine fishery (lobster) mirrors Newfoundland’s reliance on cod.

The Role of Tourism in Fisheries Crises: The Case of Newfoundland and Applications to Maine (PDF)
Presented at a NOAA seminar, Silver Spring MD, 2010. Similar presentations at the Schoodic Education and Research Center, College of the Atlantic Human Ecology Forum, and others.

Fishing for Tourists: The Newfoundland Cod Crisis and the Role of Tourism in Community Revitalization: Lessons for Maine (PDF)
This Maine Sea Grant Research in Focus fact sheet presents results of a six-month sabbatical by marine extension associate Natalie Springuel on the role of heritage and tourism in community revitalization after natural resource decline, with lessons for Maine.

The Human Ecology of Newfoundland
A course at College of the Atlantic, in Bar Harbor, Maine, co-taught by Maine Sea Grant’s Natalie Springuel. The semester course, offered ever two years, is an intense examination of the human ecology of this province; and the relationship between humans and their environment, culminating in a two-week trip to Newfoundland.