Where the river meets the sea: sampling the Penobscot River estuary

Last week was National Estuary Week, and normally I would have been out in the field to survey the Penobscot River estuary, a 30 mile stretch where the river meets the sea. Every year for the past 10 years, I have jumped into an open skiff with binoculars, a computer, and various sensors and headed out to count the animals that call the estuary home.

The habitat is not an easy one to live in, the constantly changing tides, river flow and weather create one of the most dynamic environments for aquatic life on earth. For fish like Atlantic Salmon, sturgeon, rainbow smelt, alewives, blueback herring and shad, the opportunities for food outweigh the challenges of changing temperature and salinity. They inhabit the estuary for some or most of their life depending on the species.

These fish, which become food for seals, eagles, ospreys, and gulls, are the focus of our survey. We use scientific-grade SONAR attached to a boat to measure the biomass of everything in the water column, from small plankton to large fish. Eventually, we’ll generate an estimate of fish biomass for quarter mile increments along the estuary. We (scientists from NOAA Fisheries and Sea Grant at the University of Maine) have taken these measurements since 2012. Since then, mainstem dams have been removed and fish passage has improved throughout the Penobscot watershed. What does that mean for fish in the estuary? It means more of them. And this bears out in the data. We’ve seen an increase in fish biomass – roughly three times the fish than when we started in 2012.

For the past two years we have worked with a University of Maine graduate student, Lauri Leach, who has paid particular attention to the animals above the water. We have always counted birds and seals as part of surveys, knowing that these predators play an important role in the estuary food web. This year, Lauri will collect data so she can evaluate changes in seal counts and habitat use in the estuary for her thesis.

Unfortunately, we could not sample this week, partly due to mitigation plans we have in place to prevent the spread of COVID-19 (I had a cold) and partly due to the weather as Maine dealt with the waves and wind of a dying hurricane. Natural challenges are all part of the job of field biology and don’t ever go away, they just change flavor. Soon we will have to monitor the water temperature as ice formation prevents us from safely surveying, too. But before winter, calmer seas will come again, and when they do we’ll take another check of the estuary’s inhabitants. 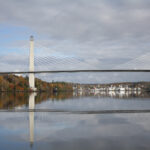 Our view from the “office” in the Penobscot River estuary downstream of the Penobscot Narrows Bridge as we approach the midpoint in our survey at the town of Bucksport in the distance. 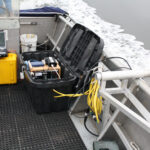 The equipment used to operate the SONAR units during the survey. The units are attached to the pole in the water on the right-hand side of the photo. We can view real time the data being collected with the laptop shown in the upper left. 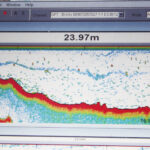 This is a close-up view from the computer, the SONAR gives us a cross-section view of the water, it tells us the depth to the bottom shown as a red-yellow line, and the objects in the water. The blue and red marks are fish and the blue wavy pattern is a layer of plankton formed by the different salinity conditions in the water column.

UMaine graduate student Lauri Leach being COVID-safe while onboard the survey vessel this summer. She is looking for birds and seals during the survey to document where and how many animals use the estuary. 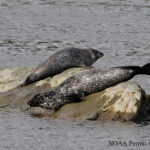 These Harbor seals are resting on a ledge in the estuary. We count seals we see during the survey to determine what impact the changing fish biomass has on their habits and overall numbers.