Young mariners in Maine go to camp, go to college, and go fishing

Have you heard about Maine Sea Grant’s radio show Coastal Conversations? It airs on the fourth Friday of each month at 10 AM on WERU Community Radio 89.9 FM, which broadcasts from roughly mid-coast to nearly the Canadian border. You can also access past shows online anytime.

Since we started the show in January 2015, we have wanted to cover youth on the Maine coast. This summer, we are doing just that with our three part “Young Mariners Series.”

I write these words from Hurricane Island at the mouth of Penobscot Bay, just to the Southwest of Vinalhaven Island. You may be familiar with Hurricane Island as the former Outward Bound base, or you may know the island for its rich history in the granite industry when a sizable number of people lived here and worked the island’s quarries.  There are lots of remnants of both eras on the island. Foundations of old houses; a ropes course for outdoor training… But since 2009, it is the Hurricane Island Center for Science and Leadership that has conducted research and education on the island.

I am here for two days. Yesterday, I spent the day with a PhD researcher, interns, and volunteers counting and measuring scallop spat (or baby scallops) to evaluate the growth rate of scallops in areas closed to fishing. Today, right now, I am siting on a granite boulder next to an old quarry at the base of a large rock wall where two middle school students are spidering up, expertly belayed by their peers.

The middle school kids are part of an Island Ecology camp at Hurricane Island that will be featured on the July 22, 2016 Coastal Conversations show, as the first installment of our three part Young Mariners series. We will also be talking that day with campers and leaders at the Downeast Institute and the Herring Gut Learning Center, both of which also run marine-related summer programs for kids. 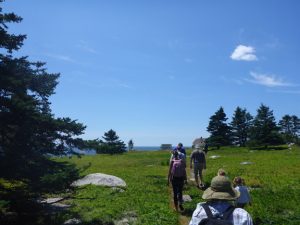 Later this summer, on August 26, the Hurricane Island scallop researchers will be featured along with other college and graduate students engaged in meaningful research on the coast of Maine. And the September 23 show will focus on young adults who are emerging as the next generation of leaders in the fishing industry.

You can find more details on each of these shows, including guests and podcasts, on our Coastal Conversations page.