While out on the Damariscotta River this morning in search of wild oysters at low tide (more on that story later), we came across this giant, gelatinous mass on the shore of Goose Ledge. None of us, not even the one who is on the water every day, had ever seen anything like it. The fingery protrusions were all connected, the whole mass jiggled when prodded. Was it alive? Did it sting? 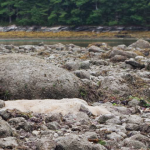 Pinkish mat of squid eggs on the rocky intertidal zone. 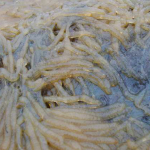 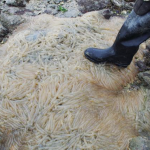 Smokey McKeen pokes a black boot at the egg mass.

Carefully, we pulled a piece off the mass and headed back to the laboratory at UMaine’s Darling Marine Center, where surely someone might be able to help us identify the thing.

“Yes, squid eggs. We should go show this to Joe Thompson.” 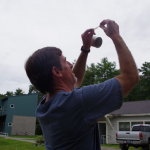 Joe Thompson holds a squid finger up to the sky 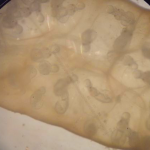 Squid eggs under the microscope. 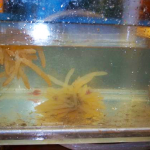 Squid fingers in an aquarium tank.

Joe Thompson is a visiting investigator from Franklin and Marshall College, who just so happens to come to the Darling Marine Center every summer to study squid. His research focuses on muscle physiology and the biomechanics of locomotion, and squid have weird muscle structure and unusual locomotion.

The egg mass of the Atlantic longfin squid (formerly Loligo now Doryteuthis pealeii) is made up of dozens of “fingers”; each finger holds 50-100 squid embryos. Joe had some typical egg masses growing in a tank at the lab, which has a flowing seawater system.

An egg mass of the size we saw—about four feet in diameter—is unusual, said Thompson, and probably represents the output of dozens and dozens of female squids.

Once a female squid selects a breeding site, is joined by a male and begins to deposit eggs, other squid in the vicinity begin to congregate and initiate mating behavior in the same area. Eggs and sperm emerge encapsulated in the jelly “finger.” The egg masses attach to hard substrate—and to each other.

Normally we can’t see these masses because they are below the tide, but the squid probably came upstream during last week’s lunar high tide and found the ledge suitable. In 11-14 days the embryos will have consumed their yolk sacs and emerged from the jelly as free-swimming baby squid. We looked at the sampled finger under the microscope and could see the squids swimming around.

Now we know. And so do you.