What baby lobsters eat and why it matters

Living in Maine, it is clear that the American lobster is a major player in the Northwestern Atlantic. Not only is lobster one of the most valuable single-species fisheries in the U.S., but it is also an important member of the seafloor community. Despite their ecological and economic importance, there is still much we don’t know about how lobsters interact with their environment during their earliest life stages.

We know larval lobsters spend several weeks in the water column after they hatch, feeding on tiny zooplankton to fuel their growing and changing bodies. Over the course of the first three larval stages and a final postlarval stage, lobsters nearly double in size, develop fully functional claws, and are able to swim with clear direction and speed. But, how do these developmental changes affect their ability to capture and handle prey? Do these changes determine what a larva is able to eat? And, most importantly, why might this matter? 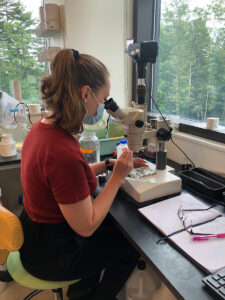 The primary focus of my research is to explore what baby lobsters eat at each stage of their development, and what might lead them to consume more of one food type compared to another. To do this, I am conducting laboratory experiments at Bigelow Laboratory for Ocean Sciences to observe the feeding behavior of lobster larvae. For some of my experiments, I use an aquarium equipped with a video camera to learn more about how larvae handle different potential prey items. Using both tethered (think tiny lobster on a stick) and free-swimming lobsters, I am able to record handling behaviors, handling time (how long it takes the lobster to eat its prey), and measure the swimming speed of both lobsters and their prey items. Using an individual lobster larva and a known number of prey items that vary in size and swimming ability, I also measure how much a lobster is able to eat of each prey item. Finally, our team is conducting zooplankton tows in the Gulf of Maine to develop a picture of the prey items that are available for larval lobsters in their natural habitats. These data can be used in conjunction with the results from my feeding experiments and video recordings in the lab to draw conclusions about what portion of the available zooplankton in the Gulf of Maine are viable food items for lobster larvae, and help test the food limitation hypothesis.

Understanding how lobster larvae interact with their prey will help us to create a more complete picture of how they interact with the ecosystem as a whole, and how they may be impacted by changes in prey availability as a consequence of climate change. These data can also be used to generate more comprehensive models predicting the abundance and distribution of lobster populations in the future.

Throughout this research process and my studies at the University of Maine, I’ve felt really fortunate to be working with the Sea Grant American Lobster Initiative. I came into the program with very little laboratory experience, and have since been given many opportunities to try new research methods and explore different aspects of the field of marine science. My advisors, Dr. Rick Wahle at the University of Maine and Dr. David Fields at Bigelow Laboratory for Ocean Sciences, along with our collaborators at Maine’s Department of Marine Resources and the University of Southern Maine, have guided me through the process as I learn how to develop my own questions, plan experiments, communicate results, and grow as a scientist.