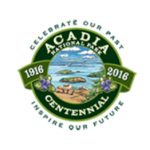 With the turn of the year, we’ve been reflecting back on the centennial of Acadia National Park and the National Park Service. As an Acadia Centennial Partner, we participated in planning with the Acadia Centennial Task Force Science Working Group, supporting a series of lectures and stories to celebrate science in the park past, present, and future.

Our Coastal Conversations in Acadia Series ended this fall, but the stories will live on for another century as part of the Acadia Centennial Time Capsule to be opened on the 200th anniversary of Acadia and the National Park Service in 2116.

Some of the science stories were shared through our work with the Mount Desert Island Historical Society at a Centennial Lecture in August and at their Somesville exhibit Before Acadia.

We are also featured in a special Acadia-themed section of UMaine Today magazine.