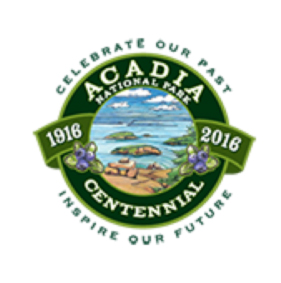 This was a special 18-part series of short (3-5 minute) stories on various topics in and around Acadia, including: science in the Park, people involved in local businesses, education programs, research projects, Park history and much more.

We are excited to report that the entire collection, including show descriptions and audio files, are now sealed away in the official Acadia National Park Centennial time capsule. The time capsule (pictured at right at a Centennial closing celebration in December 2016) will be displayed and safely stored at Bar Harbor Bank and Trust, until it is reopened in 2116.

Who knows what stories will resonate with listeners in one hundred years, but one thing the 2016 interviewees made clear: Acadia National Park is and will always be an important part of both the human and ecological communities of Mount Desert Island and beyond.

#1, July 4, Champlain 1
In the first Coastal Conversation in Acadia, we look at a group of young naturalists whose scientific explorations of Mount Desert Island inspired the conservation efforts that led to the creation of Acadia National Park.

#2, July 11, Champlain 2
We return to the Champlain Society, camp life, and their contributions to scientific knowledge.

#3, July 18, Champlain 3
The final installment of the Champlain Society explores their connections to land conservation.

#4, July 25, MDI Fish
We look at a research project to uncover the history of freshwater fishing in Acadia National Park and Mount Desert Island.

#6, August 8, 2nd Century
We learn about a brand new initiative, the “Second Century Stewardship” initiative, dedicated to science in our National Parks.

#7, August 15, BioBlitz
We travel to Winter Harbor to learn about the 14th annual BioBlitz in Acadia National Park. This year, volunteers will find as many butterflies and moths as they can in a 24 hour period.

#8, August 22, Art and Science
We discover how, in the 19th century, scientists came from near and far to study Mount Desert Island’s geology, flora, and fauna. Artists accompanied them, producing sketches, engravings, lithographic prints, paintings, and photographs to illustrate scientific reports and popular accounts.

#9, August 29, Climate Change
We’ll talk to Rebecca Cole-Will, who is the Chief of Resource Management at Acadia National Park and St. Croix Island International Historic Site. Rebecca discusses how climate change is affecting St. Croix Island and how the park service has been given a call to action to develop management strategies that address the impacts of climate change with the best available science.

#11, September 12, Dorr Museum
We talk with Carrie Graham, the manager of the Dorr Museum of Natural History at College of the Atlantic in Bar Harbor, about a new exhibit called “Exploring Acadia, Our Best Classroom.”

#13, September 26, Dragonfly Mercury
We meet Sarah Nelson who is an Associate Research Professor with the University of Maine School of Forest Resources. Sarah created a project in Acadia National Park to analyze mercury levels in dragonfly larvae, which is now being conducted throughout the United States.

#14, October 3, Night Sky
We learn about the Acadia Night Sky Festival and what makes Downeast Maine such an incredible place to watch the stars.

#16, October 17, Whales
We talk with Bar Harbor Whale Watch Company lead naturalist Zack Klyver about the status of whales in the Gulf of Maine and how climate change might impact their food sources.

#17, October 24, Transportation
We meet with Kevin Schneider, the superintendent of Acadia National Park, to learn about the Park’s transportation planning process, given rising visitation numbers, and how the public can become involved in helping identify solutions to congestion.

The shows were produced in partnership with WERU by Maine Sea Grant marine extension associates Natalie Springuel (based in Bar Harbor at College of the Atlantic) and Chris Bartlett (based in Eastport near the Park Service’s St. Croix Island International Historic Site), and Maine Sea Grant communications director Catherine Schmitt, with assistance from Eric Green.