I enjoy exploring Maine’s coast during the colder months and the bays around our home in Eastport are really special. High tides in this region cause roiling currents that bring copepods, krill and small fish to the surface. This smorgasbord attracts large concentrations of feeding birds and marine mammals that are too busy eating to care if a boat drifts among them. December 21st dawned as calm and mild, so I seized the opportunity and headed out on the water to enjoy this first day of winter.

I saw lots of gulls feeding in the rips between Eastport and Campobello, New Brunswick and motored over to check things out. A few hundred black-legged kittiwakes swirled in the air and plunged for krill while several harbor porpoise lunged after unseen prey. Kittiwakes are small gulls with yellow bills and black wing tips that typically spend the winter far offshore. In 1996, Eastport set a record for the most kittiwakes reported during the annual Audubon Christmas Bird Count when over 65,000 were seen.

As I got closer to the feeding aggregation, I spotted dozens of razorbills gathered up in groups and diving together like synchronized swimmers in a water ballet. Now you see ‘em, …now you don’t. Razorbills are members of the alcid family of birds that includes the more colorful Atlantic puffin. Thousands of razorbills nest during the summer months on offshore islands that are part the Maine Coastal Islands National Wildlife Refuge. I spotted a thick-billed murre, another alcid, which travels from its northern breeding grounds to spend the winter in our “balmy” waters. 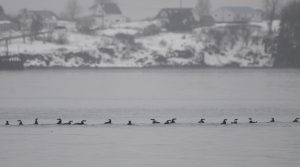 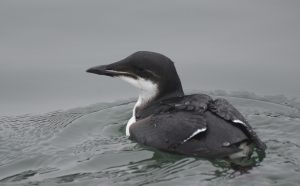 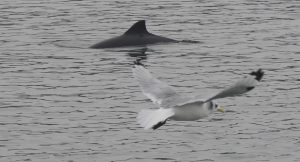 A lingering minke whale blew nearby and I watched its back arch above the surface as it dove.  Gulls surrounded me. Kittiwakes and herring gulls made up the bulk of the feeding flock and I noticed several Iceland gulls in the mix.  Iceland gulls are similar in appearance to herring gulls and have very pale wing tips.  These northern breeders prefer to spend their winters along our coastline.  Birders often congregate at the few remaining landfills in Maine to catch a glimpse of these “white-winged” gulls pick through garbage. It’s nice to see these Iceland gulls around my boat catching their own lunch at sea.

I hung out for a couple of hours amidst the commotion of squawking gulls and puffing porpoise until the tide slackened and the party ended. What a great day! I pointed the bow towards the harbor and started thinking about my next opportunity for a winter adventure along the coast.

Chris Bartlett is a Marine Extension Associate with Maine Sea Grant and University of Maine Cooperative Extension. He lives and works in Eastport, Maine.