Listen to the show on WERU archives

Since late December 2021, a rare Steller’s sea eagle has been repeatedly sighted by hundreds of people on the Maine coast. This raptor is significantly bigger than our own beloved Bald Eagle. Its home range is very far away in coastal Siberia, around the Sea of Okhotsk and the Kamchatka Peninsula, down to Northern Japan and as far as the Korean Peninsula.

There are reportedly only around 4000 Steller’s sea-eagles on the planet, and they are listed as a vulnerable species on The International Union for Conservation of Nature Red List of Threatened Species.

Starting back in August of 2020, birders noticed its presence in Alaska. A few months later in March of 2021, a raptor presumed to be this same eagle was sighted in Texas. And then in June multiple confirmed sightings were reported all the way east, in Québec’s Gaspé Peninsula. November in the Canadian Maritimes, December was Massachusetts, and then, December 30, 2021, it landed in Maine and continued to be sighted in the Georgetown to Boothbay region until March 5th. 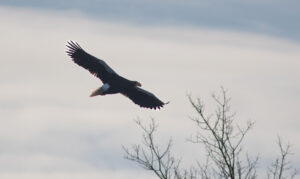 This Steller’s sea-eagle, native to far eastern Russia, Japan and South Korea, is far from home! From late December 2021 to early March of this year, this raptor was repeatedly sighted along Maine’s coast, mostly in the vicinity of Boothbay Harbor. 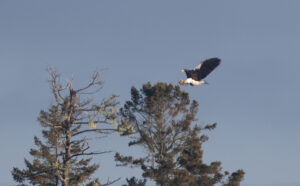 Why has this Steller’s Sea Eagle been wandering the northern hemisphere? What do we know about its ecology and conservation? And how has its presence captured the imagination of seasoned birders, coastal residents, and a growing cadre of community scientists? These are the topics for today’s episode of Coastal Conversations.

Numerous articles have appeared in Maine’s media about this eagle.