Listen to the show on WERU archives

Today, we venture out to the most remote of all of Maine’s islands, Mount Desert Rock, an exposed ledge, barely 3 acres in size, that emerges from a remarkably productive patch of ocean about 22 nautical miles south of Mount Desert Island.

Since the early 19th century the island has had a light tower to assist mariners, and various buildings to house light-keeper families. In the mid-20th century, the island was occupied by the United States Coast Guard. And since the 1990’s, after the Coast Guard automated the light station, Mount Desert Rock has been the home of the Edward McC. Blair Marine Research Station, operated by College of the Atlantic out of Bar Harbor.

On our show today, we’ll start our exploration with a history of Mount Desert Rock with Olivia Jolley, one of this summer’s station managers and a recently graduated senior at College of the Atlantic whose final project was to develop a comprehensive timeline of the island through interviews and archival research.

We’ll then hear about life on the Rock and the rhythms of the daily research tasks, like tower watches, where all wildlife and vessels spotted from the lighthouse are documented, in an ever growing, decades old data set. We’ll learn about the scientific, logistical and artistic work happening at Mount Desert Rock this summer, from interviews with a number of this summer’s undergraduate residents.

And then we’ll wrap it up with a conversation among those residents about the ethical questions they are grappling with related to science and the impact of humans on Mount Desert Rock’s wildlife, from sharks to seals, to gulls, the omnipresent gulls, and even down to the microscopic plankton species that drive this complex oceanic food web.

Tune in August 27, 2021 to learn all about Life and Science on Mount Desert Rock. Only on WERU Community Radio, 89.9 FM and streaming online at WERU.org.

The voices on today’s show are all members of the 2021 College of the Atlantic Mount Desert Rock crew, all of whom, including station managers, are either current students or ’21 graduates of COA, including:

Thanks also to Galen Koch of The First Coast and her intern Camden Hunt for their help gathering audio and brainstorming story lines.

Thanks to the behind the scenes Mount Desert Rock support crew from COA who helped us get out there, including Toby Stephenson, Ela Keegan, Dan Den Danto, and Sean Todd.

And thanks especially to Olivia Jolley, whose passion for this strange rocky oceanic ledge inspired this episode of Coastal Conversations.

Past news articles about student work on Mount Desert Rock 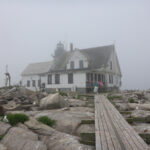 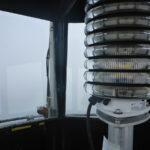 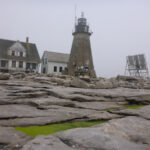 The lighthouse keeper’s house was home to two families. It was a mirror image of itself, with each family having one side of the house with their own kitchen, staircase to the upstairs, porch and entryways, all separated by a wall down the middle. 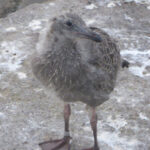 A colony of more than a thousand gulls, Herring and Great Black-backs, has settled on Mount Desert Rock and co-exists with research crew. 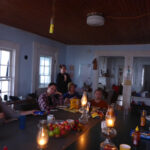 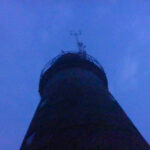 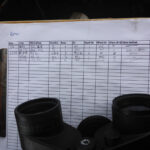 The student researchers rotate through “Tower watch” shifts during which they keep detailed records of all sightings, including species of whales and sharks, passing fishing, cargo or recreational vessels, and environmental factors such as visibility and cloud cover. 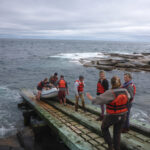 Mount Desert Rock’s boat ramp is where all passengers, food, fresh water, scientific instruments and mail come ashore for the crew. The ramp can be dicey in certain wave conditions so crew members stand at the ready to stabilize the zodiak. 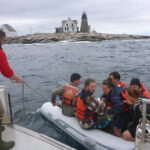 Crew members wait until the zodiak is secured to College of the Atlantic’s R/V Osprey before boarding.